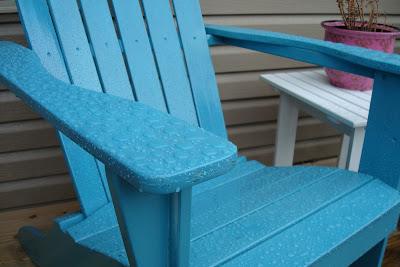 Hooray for Spring! Spring and Fall are my favorite seasons... you get to see all of the changing scenery and the weather is just perfect (usually)!
I've been making some bright changes to get ready for Spring and warm afternoons on the porch!  After I transformed the blue chair for my front porch I decided to do the Adirondack chairs on the back porch.  I went to Lowes to get the same blue spray paint... AND THEY WERE OUT!! *Small tear*
There was a shade of blue next to it that was not quite as brilliant, but the hubby liked it better so I went with it.  True to Spring, it was crazy windy outside and I was in a race against impending rain.
I worked on this project over Spring Break and had to get it done, so I couldn't just wait for a later time.  So I did what any respectable person would do.  I spray painted under my back porch. 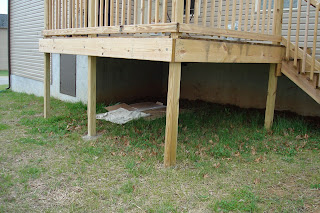 I will NEVER do this again! LOL! My poor little back hurt so bad from bending over for almost an hour, and I whacked my head on the wood beam real good at least once.
But it worked.. for the most part being under the porch blocked a lot of the wind and I was able to finish my chairs.  I was working on some iron chairs as well, so I had two separate projects going on.  Here they all are before: 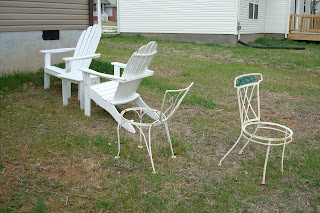 The solid white iron chair was given to me by my Father-In-Law, and the white and green iron chair was saved from the dump by my Sister-In-Law!
I adore the adirondack chairs now... the hubby approves too! 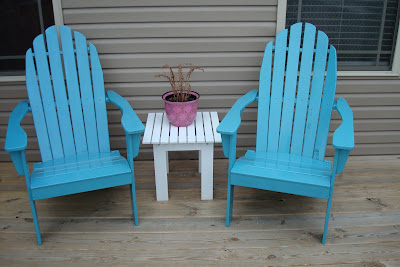 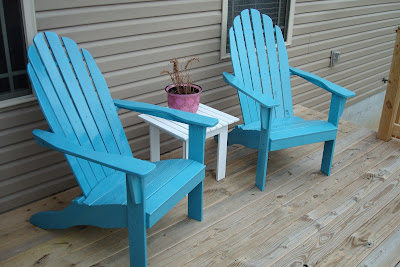 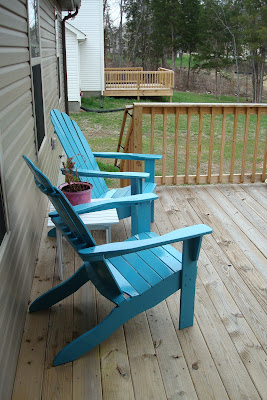 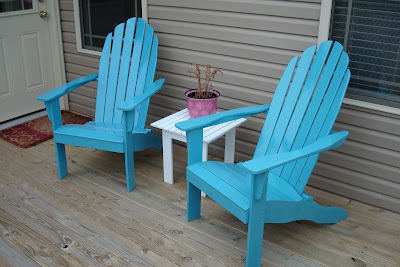 Don't laugh too hard at my plant.  It's not really dead, it's one of those pretty brown plants! ;)
It did nothing but RAIN for at least three days after I finished them, but they have held up just fine! 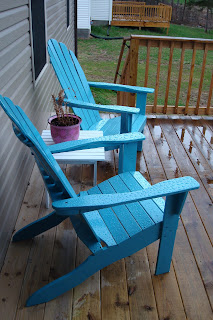 I was in a HUGE rush to finish my iron chairs, so I was bad and didn't take many in between shots.  You can see one of them in the back of this picture with the wood seat cut out. 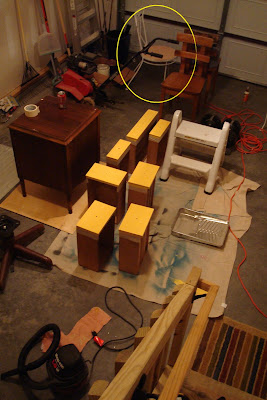 After they were spray painted I had to trace out the pattern for the seat.  I used wood I had left over from my bookcase project.  It is similar to the wood I used on my $5 wall art. 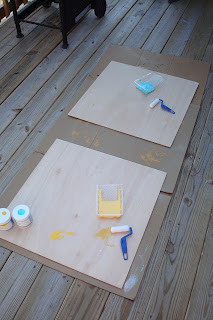 Because it is so thin I cut out two circles using my jigsaw so they would be thick enough.  After the circles were cut out I glued them together with my gorilla glue and used a hand-held staple gun to staple on the batting and fabric.
They now sit on opposite corners of the back porch: 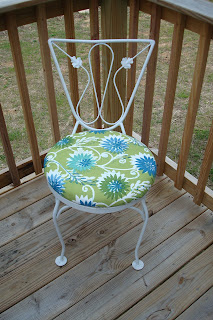 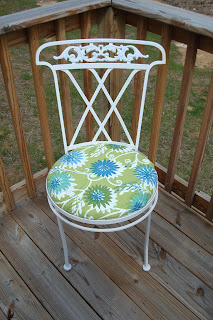 I'm loving my back porch and the weather!! Now I just need some beautiful flowers (not the brown kind)!
Cheers!!

Linking to these parties!
Debbiedoos Color Party!
Posted by Katie at 8:55 AM