Not Yo Mama's Thread Holder!

I'm slowly knocking out projects for the new office!  It is taking me longer than I anticipated.  I almost always underestimate how much time I need, so that's no surprise to me.

Rather than wait ten years to show you the final reveal, I'll show you little bits and pieces along the way!  Mmkay?

Last month I found Grey Luster Girl's framed thread holder tutorial on pinterest and flipped out!  I knew I was going to try this as soon as I saw it, just with my own little spin! :)

Once it was stained though I loved it so much I didn't want to cover it up!!  Rather than frame it, I decided to tape off a 1.5 inch border to create the illusion of a frame.

1.  I bought this basic piece of wood at Lowes for 8 bucks.  It's something like 1.5 x 2.5 feet.       2.  Then I used my favorite stain, Minwax Dark Walnut, to stain it.  3.  Next I grabbed some ScotchBlue painter's tape and taped off the borders, then taped a chevron pattern (eyeballed it, of course).  4.  I painted over it with white then peeled the tape off! 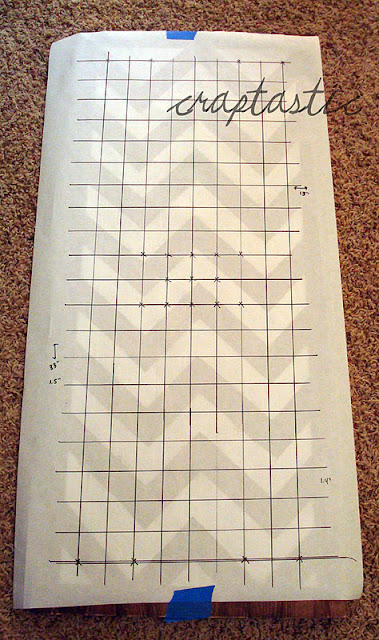 Once the paint was dry I took my orbital sander to it and distressed the mess out of it!

Now for the tedious part - math. Blah! I placed some freezer paper on top so I could still see the pattern, but draw directly on the board (can you tell I'm obsessed with this stuff? I use it for everything!)

I figured out how wide and tall the work area was, then I spaced out thread to determine how many spools I could fit into a horizontal and vertical row.

For example, I could fit 9 spools on the bottom row.  I had 13 inches of space (remember, I'm not counting the border).  So 13 divided by 9 is approximately 1.4 inches.

Doing the same math for the vertical row, I ended up with a grid that had 1.4 x 1.5 inch squares.  I just traced it right on the freezer paper, leaving a little space on each edge so the spool of thread would sit right inside the border, not on it.

I used a small drill bit to place pilot holes, removed the paper, then hammered in all the nails.

I broke out in a sweat people! A SWEAT!

Now, it's hard to see in the photo, but the nails are actually in the shape of an "H". Look real hard, you'll see it! 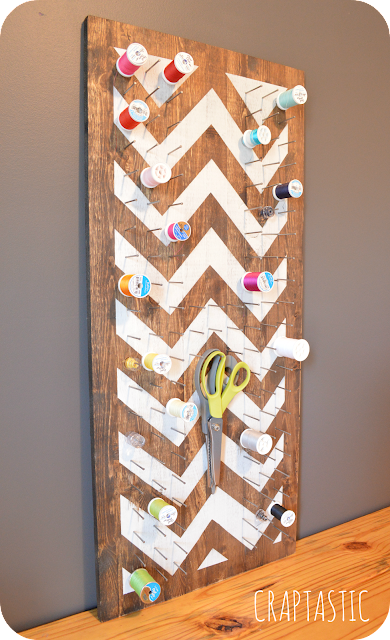 I had this idea when I realized how few spools of thread I had.  It would take an eternity for me to fill up the entire board, so I thought I would make the nails an "H."

Now my thread holder is a double piece of art - cool chevron pattern AND an initial!
*SQUEAL!* 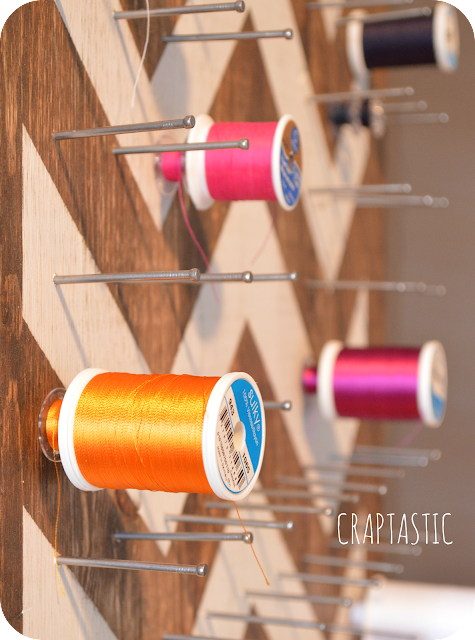 I love the modern/industrial look with the white, wood, and metal nails!
The nails are 2 inches. I would have liked 3 inch nails, but I couldn't find any (I really didn't look hard).
Here you have a sneak peek at the desktop stained!  I didn't go with Dark Walnut on the desktop because the wood is intended to brighten up this dark room! Rather than make more holes in the wall, I'm just leaning the board against the wall next to my sewing machine. 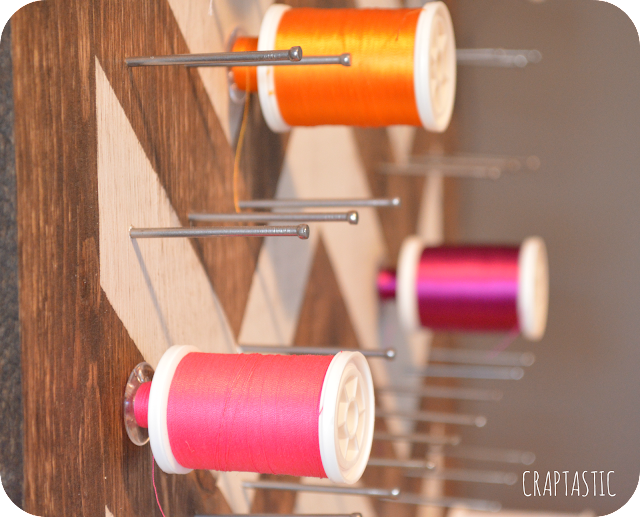 The whole project cost me $10!

It can hold up to 137 spools of thread - if for some reason I need more one day, I'll just add in more nails to make it a solid block rather than an "H."

I love it!!
**This post has been edited to add new photos taken with my awesome new camera**