Monkeying Around and A Giveaway Reminder! 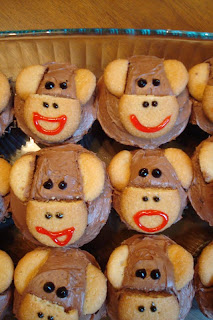 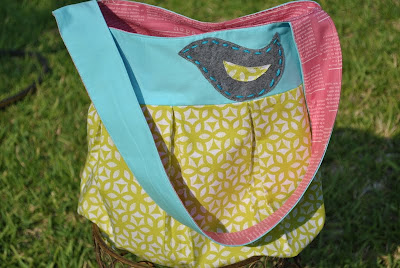 Every Wednesday night the hubby and I have dinner @ the in-laws house with his Sister and her family.
I came across a cute idea of monkey cupcakes last month (I cannot for the life of me remember what blog it was)... I've been dying to make them ever since! So I did!
They are really easy to make and look adorable!  Just make your cupcakes like the box tells you and be sure to get chocolate icing.
While the cupcakes were baking I went ahead and cut up the vanilla wafers for the face and ears.
For the face, you use 3/4 of a regular size vanilla wafer.  I used a serrated knife to kind of 'saw' off the 1/4 I didn't need. 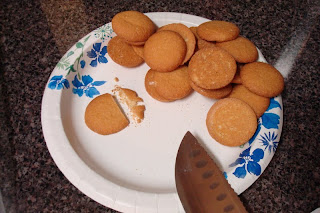 Then I placed all the faces on wax paper and applied the mouth with red icing. 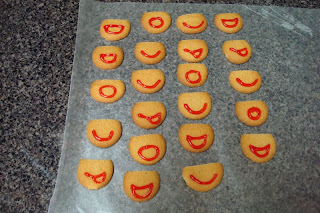 I used four different faces.  I love them!  Then I made two little dots above the mouth for the nose using black icing.  Here they are laid out with the faces on the right, and the ears on the left. 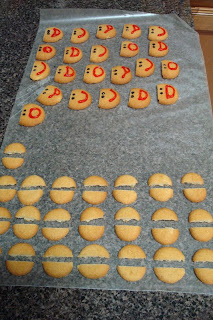 The ears are mini vanilla wafers cut in 1/2.  Again, I cut them in a saw-like motion with a serrated knife.
After your cupcakes cool down ice those bad boys up! 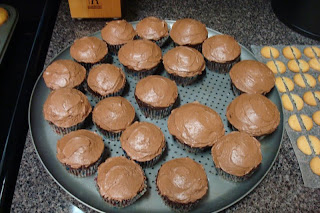 After I frosted the cupcakes I started to build the face.  First I pressed the 'face' vanilla wafer in the bottom on the cupcake, then put the two 'ears' above and just next the face.  It helps if you push them into the cupcake... they look better and stick better!  Two dots for the eyes and you're done! 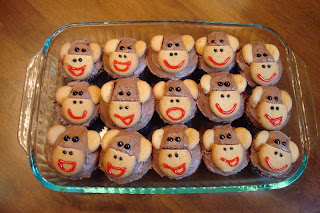 This shows the variety of faces.

These weren't really expensive to make, but because you had to buy the special colored icing and the two types of vailla wafers it added up.  It was roughly $13 to make 2 dozen.  But man they were cute and delicious!
Cheers!