They Call Me Mellow Yellow...

This summer I scored a super cute side table at a yard sale.  The poor thing was sitting in pieces all by itself.  I thought even if I couldn't fix it, it would only be a $2 loss.  I snatched it up along with Harry Potter Scene-It.  Best $4 I ever spent! = )
A few months back I found this adorable little seat over at Perfectly Imperfect.  I fell in love!  I knew I wanted to do something in my house yellow, but what?  Then I remembered the cute little side table I scored during summer yardsaling!  Here she is in all her before beauty. 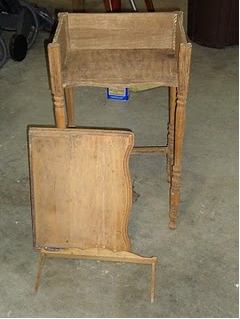 It was nearing the end of the semester, AKA final exams and projects, so I needed to get this bad boy done quickly!  Spray paint it was.  If I haven't mentioned it before, I'll mention it now. I HATE SPRAY PAINT! But I needed a quick fix.
I began spray painting, and much to my disgust the table sucked it up.  That's right, sucked it up.  It was like something off The Twilight Zone.  I could see some of the yellow sticking, so I left it overnight and bought a more heavy duty version of the spray paint the next day.  That did the trick.  A little spray paint and glaze later I had an awesome side table! 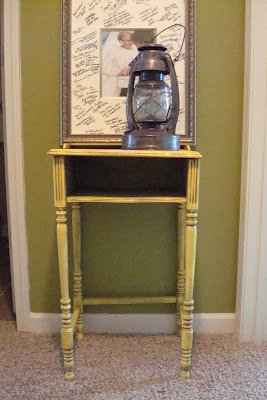 Like that wedding photo? Haha!!  Almost four years later and I still have the generic wedding photo in it.  *Sigh*  One day I'll get a photo of me and the hubby in it.
I love the detail on this table. 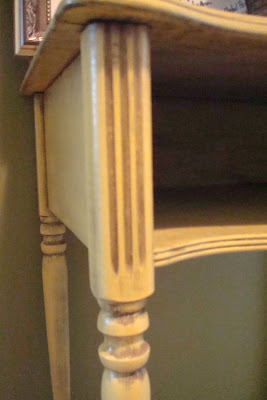 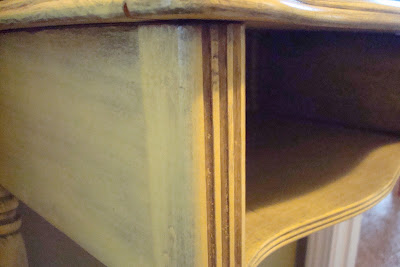 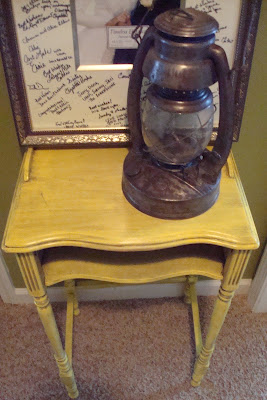 My favorite part of all?  It was so cheap!  I love it in all its imperfectness (is that even a word?)
Linking Here!
Posted by Katie at 3:32 PM