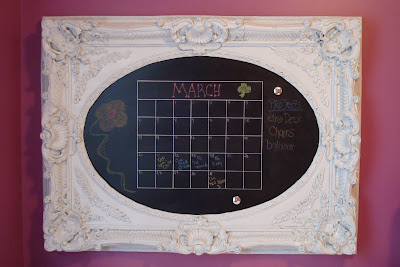 If you guessed that I was making a chalkboard out of my epic Craigslist find you were right!  But there's a twist to this one!  It's magnetic too!!
I started by priming the frame with two bottles of Krylon white primer. 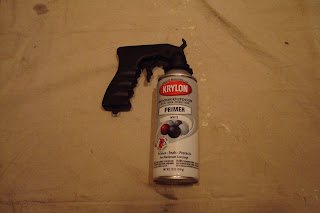 I then used two bottles of Krylon white semi-gloss for the color. 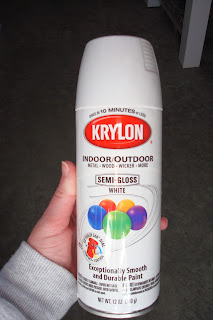 I did all of this in my garage - I needed to lift it up off the ground, so I propped it up on two paint buckets.

While I was painting the frame began to grow fur. 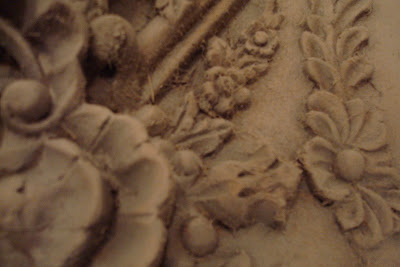 I thought the frame was completely clean when I started spray painting, but obviously not.  I grabbed my Purdy brush (which was the closest thing to me) and brushed vigorously over the whole frame after it was dry.  This got the majority of the fuzz off.  I just kept painting and rubbed the rest off a few days later.  It's nice and smooth now! 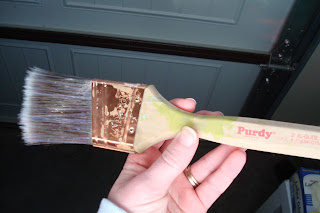 In order to have chalkboard and magnetic capabilities, I decided to spray paint chalkboard paint onto a sheet of metal.  I ran to Lowes and found a 2x3 sheet of metal.  I honestly didn't know what size I needed, so I just grabbed the one that looked closest.  Much to my satisfaction, it was a perfect fit! 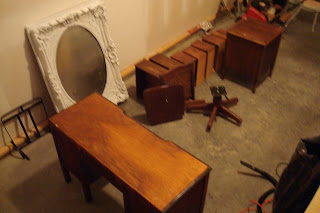 Before I put on the chalkboard paint I sanded the sheet of metal with my dremel sander. 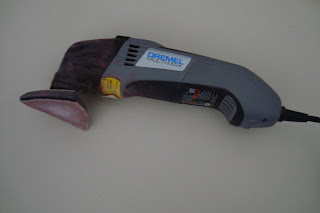 I was in a HUGE rush so I only have one photo of the metal sanded.  You can see it on the ground here. 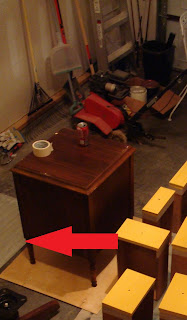 I then used the last of my Krylon primer to prime the metal before putting on the chalkboard spray paint. 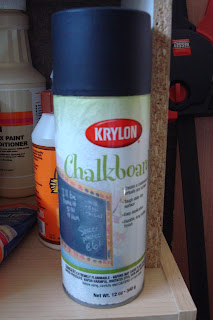 Here she is with a coat of chalkboard spray paint ready to have the calander drawn on.

I wanted to make sure it looked ok with the chalkboard paint. I loved it!  I left it for one week before I began any work on the calender.
In order to do the calender I had to make as precise of a measurement as I could.  I wanted the calender template centered, but I didn't want it to take up the entire center of the frame.
So I made a very professional sketch and wrote down my measurements. 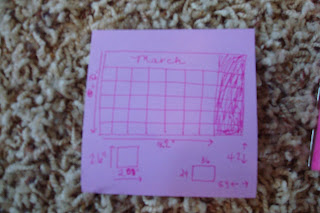 After I had marked the edge of the template and made a notch every 2.6" I traced it out in pencil. 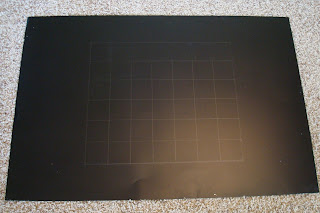 I then used an acrylic paint pen (which is awesome) and my ruler to paint on the lines. 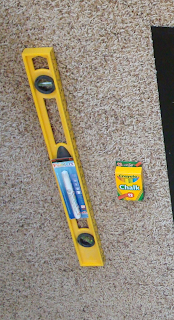 I began with the vertical lines. 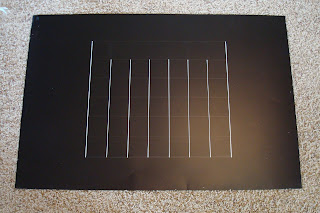 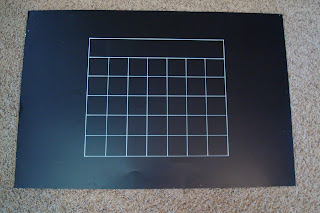 I never read instructions, so fortunately for me I had read on other blogs that you have to rub over the entire chalkboard surface with chalk before you write on it.  Otherwise it will permanently imprint whatever you write in it. 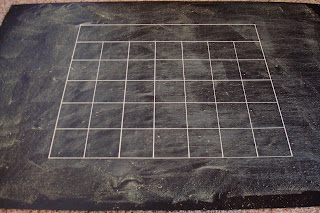 I went ahead and drew on my calender info for March and stuck it into the frame to make sure the size would work.  Perfect! 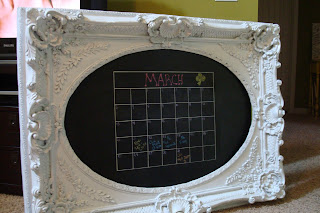 I thought about putting a sheet of wood behind the metal to make it more sturdy, but I found that simply placing screws every few inches behind the sheet of metal held it in place fine. 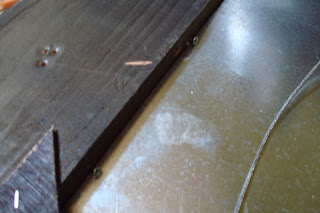 Once I felt like the sheet of metal was secure I got ready to hang it on the wall.  I wasn't taking any more chances with pseudo home invaders so I put THREE anchors in the wall!  This bad boy isn't budging!
Worked like a charm!  This frame is heavy and cumbersome, so I probably should have waited for the hubby to get home and help - but you know how that goes.  I wanted it done NOW! It was worth a potential broken bone! 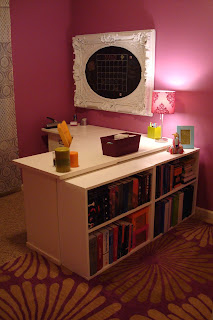 The little silver pieces are magnets.  Eventually I'll probably make some cute rosette magnets.  But for now it's really not a necessity! 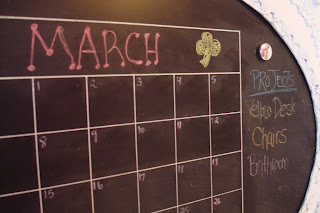 My initial thought was to make magnets numbered 1-31, then make a magnetic header for each month.  That way it would be easy to switch the calender around each month.  But I knew it probably wouldn't turn out like the vision I had, and it's just as easy (and fun) to re-do the calender with chalk each month.
I love it! Hope you do too! Enjoy all the views! 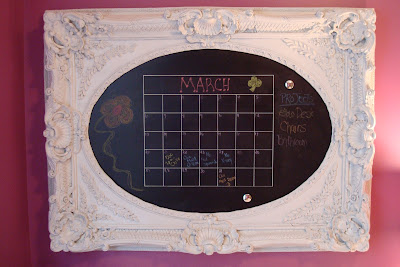 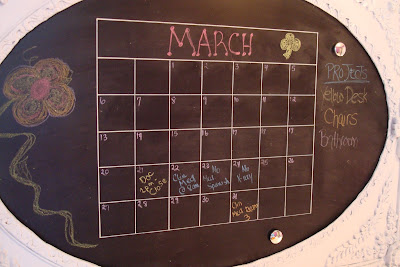 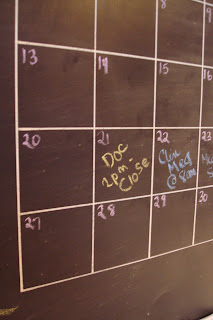 You can really see the imperfections of the frame in this photo.  Unless you're really up close investigating it they're not terribly obvious. 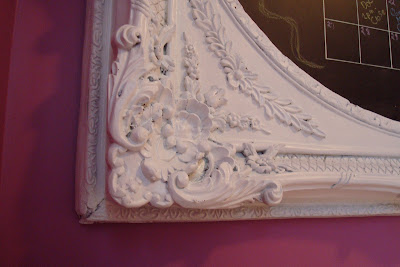 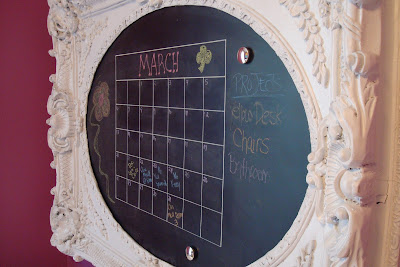 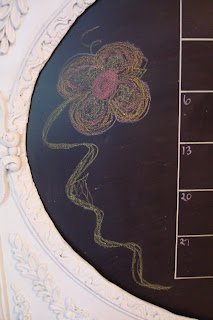 Now I just need to work on my chalk caligraphy skills!

I've been playing with my chalk!  Chalk caligraphy is getting a little better! I'm ready for April! 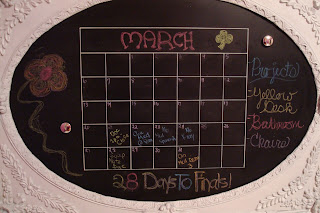 ﻿
Linking to these awesome parties!